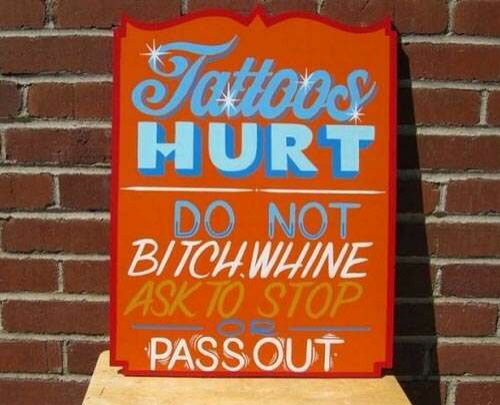 After waiting 3 weeks, I was itching to get back in the tattoo chair. Planned were some fillers, background shading, little touch ups and time permitting to hopefully begin the outline on my other arm. There were none of the nerves, apprehensions or ‘what ifs’ of last time, I was just filled with excitement from head to toe…the last thing I was expecting was such serious tattoo pain!

Tattoos hurt there is no getting away from that, but in my previous experience they do not hurt badly enough to go from being uncomfortable to actually painful. However almost from the word go my arm began to swell, felt hot, went red, wept and bled. Then the shakes started .. all together contributing to a pretty miserable time which I was desperate to push aside as I was so pleased to be continuing with this: It hurt A LOT more than the first sitting but I was determined to get as much done as we could and as usual my stubbornness shone through. After about 4 hrs it was super swollen and we stopped to outline the other arm. This wasn’t much better …it was like my body just given up!

I’m not sure why this happened, but what I do know is that I do not want it to happen again next time – this is a hugely empowering and enjoyable process for me, I don’t want it dampened by exaggerated pain.

After the first sitting my arm healed brilliantly, no issues with it whatsoever and on the surface my skin didn’t appear to react any differently to getting tattooed on clear skin. Perhaps the tingling sensation I spoke about within the aftercare post was coming from underneath the top layer, somewhere down in the scar tissue that was struggling and didn’t take kindly to being punctured around again so soon?

This probably didn’t help with the tattoo pain even after making sure that I had breakfast and plenty of fluids throughout the day. As a trauma response the body produces adrenaline and endorphins, this mixed with low blood sugar from a lack of food, or blood sugar spikes from things like sweets can lead to the shakes, feeling sick … passing out.

My inner forearm is more sensitive, something that is probably the case for most people. It it also much clearer than my outer arm in terms of scarring so if anything I expected it to hurt less, or at least be a bit more consistent… it went from agony to numbness, to being stabbed with a hot poker to ticked with a feather. Not knowing what was coming with the next breath, along with the ever increasing swelling was most unpleasant.

Probably this^^ The general consensus around whether there is any way to guarantee a reduction in tattoo pain is that you cannot. There is no sure fire way of knowing how the body will react, just close your eyes, hope for the best and get on with it! When the body has had enough it will let you know.

Despite the pain, it was worth it, I’m still totally in love with the design and not missing my scars one bit. Brilliant article here on managing tattoo pain courtesy of Modern Body Art, Birmingham & watch this space for an update on how it heals.