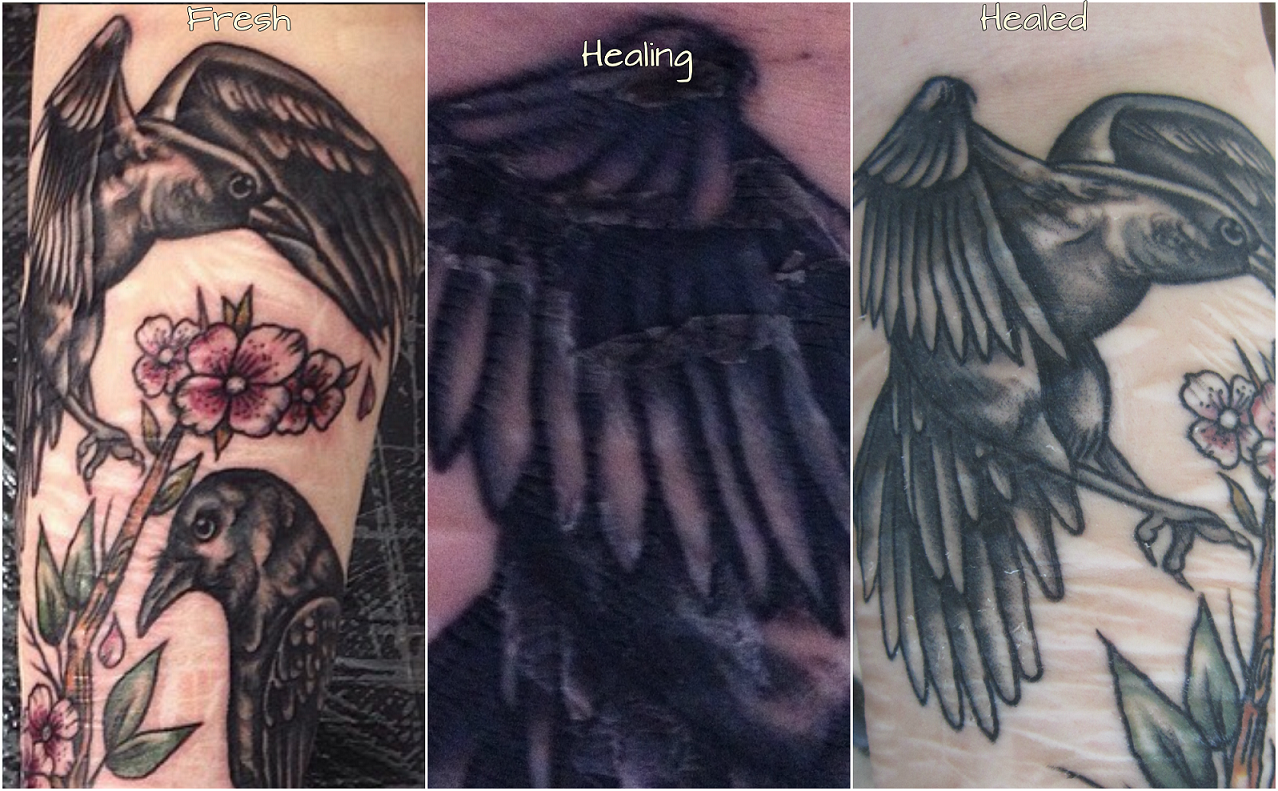 Tattoo Aftercare: How I healed having previously damaged skin.

So my arm swelled up like mad and I looked like Popeye on a spinach binge upon leaving the studio; by the time I got home there was some kind of bodily fluid mixed with black ink seeping out the bottom of the cling film… bet I looked great on the train!

In regard to tattoo aftercare and piercings generally, I’ve always been an avid follower of the leave it the hell alone brigade. So no touching and no special cleaning other than showers. With this I wanted to take extra care of it to ensure that it healed well and most of all, that I didn’t get any kind of skin infection as some of the scarring has left ridges which would be prone for bacteria build ups.

Once I got home I unwrapped the clingfilm, splashed it with cold water (heaven in a tap!) and gently used just regular anti-bacterial household soap to wash the fresh ink. After making sure all the soap was washed off, I let it air dry and wrapped it back up again with new clingfilm. Why re-wrap? Because it was weeping and I have pets so didn’t want to get any dirt or pet hair stuck on it. I washed it in the same way every 4’ish hours and kept it wrapped over night for the first ~48 hours.

Until it had stopped weeping altogether and I could see that it was starting to heal, I was careful not to put my uncovered arm down on any surface which wasn’t reasonably clean (ie that my cat hadn’t walked on) and even then I continued to be really careful with it until it was properly surface healed (you know, just in case it rubbed off or something ^_^ )

It was around the 48 hour mark that the majority of the swelling and initial redness had subsided, although still a little sore and I certainly knew about it when sat in direct sunlight! I didn’t use any ointments because I didn’t have any, but I also have eczema prone skin and the last thing I wanted was to react to an ointment resulting in an itchy red mess. Keeping it clean was working and after around day 3 it was getting the beginnings of what would then peel off.

At this point I started applying a light layer of plain, chemical free moisturizer several times a day, washing away any residue between applications. Then the itching began … that moment of satisfaction having peeled off a bit and relieved the itching just isn’t worth it! It also began to look really ugly, some places peel faded, others with a white’ish sheen, others shiny and fresh looking. Stick the flaky bits down with moisturizer and brave it out!

The last little bits of peeling washed / fell off after around 9 days. I had a slight tingling sensation that felt like it was coming from just under the skin for another week or so, but apart from that, there wasn’t any noticeable difference in the healing process over scarred skin than clear skin.

The above worked for me and I am amazingly happy with the results, it looks so much better than I ever imagined and I can’t wait for the next session to get some more filler bits to further cover the scarring: There are so many takes on how to heal a tattoo and no body will ever agree on a singular best form of ‘best practice’ tattoo aftercare. The internet is full of great info but listen to your artist, they don’t want their work ruined by a dodgy heal either!