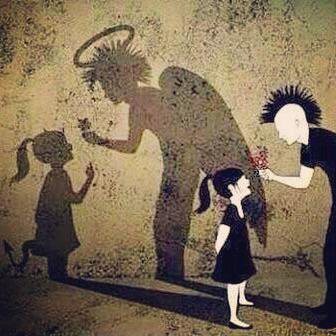 As you’ll know if you’ve read my previous blogs I loathe being judged for things that people do not understand, namely my 10-15year old self-harm scars.

This extends to any kind of judgment calls based on face value; based on outward appearance. So stereotyping, generalizations .. anything society and the media tells us to be true, inter-twined with what we have possibly experienced to be true based on our own frame of reference. We all do it, it is natural, it is automatic but that is not to say we should not challenge ourselves on it and focus on what is underneath the outward shell.

Allowing those unchallenged judgments to affect interactions with others can be hurtful, it is unnecessary and importantly, most often we are wrong. By looking deeper, finding what’s underneath, observing personality and actions… then there is something valid to judge.

Tattoos are a form of art and not all art is to everyone’s taste .. something we personally find garish or tacky will be somebody else’s pride of place in their living room. Art is subject to critique no matter what form it comes in and this stretches to other people’s tattoos; nobody has to like them nor appreciate them, where the line is crossed though is where it reaches a place of prejudice and judgement of the person sporting them, not the art work itself.

One might think a tattoo is ugly or badly placed; that doesn’t make the person underneath ugly and attacking a person’s character based on an opinion about the art crosses into the bounds of prejudice.

What’s the difference between an opinion and a prejudice? Isn’t a prejudice an just an opinion? .. A prejudice is an opinion, one formed without examination of the facts and based upon unreasonable preconceived ideas. Subtly different to the opinion which is formed after evidence gathering. One tends to lead down the path to discrimination, the other does not.

What are some of these societal assumptions and prejudices that need a little consideration?

I will raise them to be tolerant and appreciative of difference rather than judgmental on things as superficial as appearance. It can be difficult not to pick things out about other people’s appearances, but if everyone were uniformed, lacking in personal style or expression the world would get boring very quickly.

The trouble with what the future holds is that no body actually knows what it will hold! So the skin might not be as firm and tight, some tattoos might become a little wrinkled or faded .. tattoos are something that a lot of people can feel proud of and be very meaningful to them. They can be memory soaked, commemorative, beautiful, personal and intimate pieces of art that stay with people as they journey through life.

This is a fai

rly outdated notion. In today’s world, tattoos do not make you unemployable and should never hinder the ability to find a job, as they do not interfere with work performance. Certain jobs which historically have not allowed visible tattoos are changing their policies having recognized that blanket bans are hampering recruitment: Police officers should be allowed to have tattoos on their hands, neck and even faces, the Police Federation of England and Wales says. This is just one example of many.

Visible tattoos may hinder employment or progression in certain sectors; maybe because there are some beliefs around it effecting customer relations however for any aspect of appearance to affect the sale, development, management etc of the work they are involved in, the problem lies not with the aspect of appearance, but with the person/s who feel they cannot be trusted to deliver due to appearance based factors. Ultimately, I would rather work with those who celebrate diversity and inclusion rather than having to negotiate the working day around a company embracing such old fashioned notions re tattoos and body piercings. Not only could this be a pretty miserable workplace, but might this also be a prime breeding ground for wider outdated attitudes such as misogyny or homophobia?

Times have moved past the idea that tattoos, professional and smart cannot all fit together in the same sentence, however just as one would wear a suit to an interview if this was a company expectation, keeping body mods under wraps sadly may still be something to consider when looking for a job.

What does a chav look like exactly? These old connotations that tattoos are somehow tangled up with gangs, violence and crime are indicative of classist assumptions about men; just as the ‘tramp stamp’ relies on sexist stereotypes about women’s bodies. Tattoos have long since transcended this rubbish and really cannot be used to profile people.

Having tattoos is not an indicator of intelligence, wealth, political affiliation or value. It doesn’t mean people sell drugs, nor that their children are in care and if they are then that is not about the tattoos. The only thing having a tattoo definitely indicates is that they are a person with a tattoo!

I know that not everybody will like my tattoos and my self-worth does not depend on what anybody else thinks of me, but what other people think of me can and has impacted on my life. I would much rather be judged for having multiple tattoos than for old self-harm scars. We are all different, we like different things, we don’t like other things. People will never agree all the time, however stigma and bias shame us all. Peace.